Whadda ya do with 14 pounds of strawberries?

This past Saturday, Firas, Maura, and I went strawberry picking. 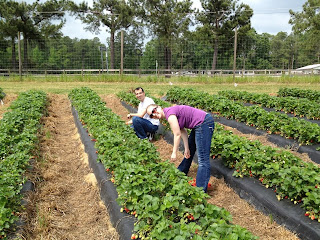 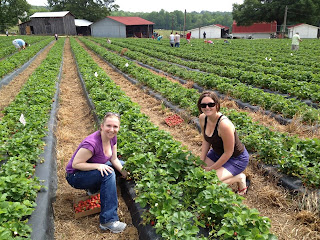 Firas and I may have gone a bit overboard as we ended up with about 14 lbs of strawberries.  Whoops. So then we had to figure out what to do with them.

Well, first we ate lots.  Then we decided to make smoothies 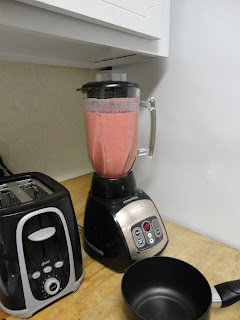 Then Firas got super excited about making jam.  Turns out this is an easier process than I remembered, but my memory may be biased by the fact that my aunt and I made GALLONS of jam one afternoon.  Turns out only making a little is much easier.... 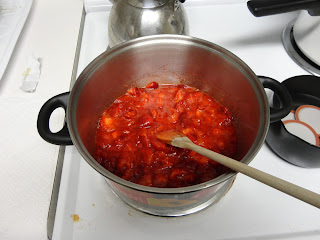 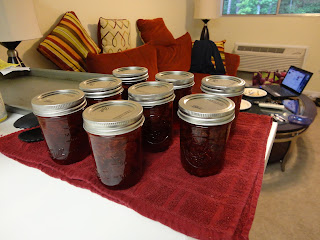 I think we even successfully managed to get the lids to seal!  There was a point where I wasn't really sure it was going to work.  Basically, the jam was still super hot, but Firas and I kept poking at lids saying "Why aren't they staying down?!?!"  Ok, so we're not supremely patient.

I wish I had a picture of Firas' kitchen post-jam making.  It looked like a strawberry goo ball exploded and managed to hit every surface in the place.

Somehow in the middle of the jam explosion, we also made salmon with strawberry salsa. 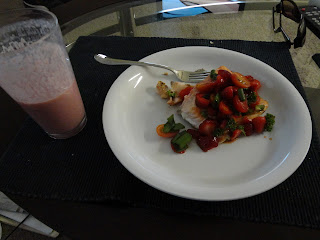 I plant this recipe directly in the "meh" bucket.  I think the salsa may have been better with more balsamic vinegar or something, but hey, it was an experiment!

So, to make everyone happy after the meh-salmon, we made daiqaris. 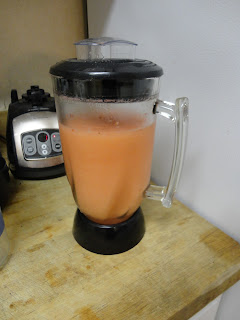 I successfully killed the handle of rum that I managed to inherit after the prospie-party when I was grad rep.  What was that, 3 years ago? Yeah, I don't usually drink rum.  Whiskey on the other hand.....

Right, so where was I? Oh, yeah, so we woke up after the non-enough-rum-and-daiqari evening and had pancakes! 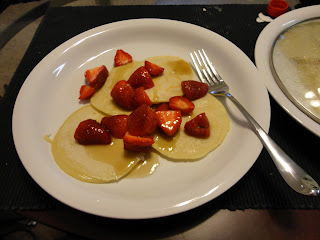 Technically they aren't really pancakes, they're essentially Czech crepes.  In my house we always called them "platski" which is apparently a massive bastardization of the real word.  Google translate has just informed me the correct word is is "palačinka."  What's so great about them is they're super easy: 1 cup flour, 1 cup milk, 1 egg, a dash of vanilla, an voila! Pancakes!